by she does digital • may 1

Natalie Lovett is the Cloud Commercial Lead at Infinity Works Consulting, but her route into the tech industry wasn’t as straightforward as you might expect. From a passionate start in the music industry to spending years working for the police, her roles have certainly varied over the years.

Music has been a constant part of my life since I was little, and all I wanted to do was play and record songs, join bands and perform. So, as soon as I could leave school, I signed up to a music technology course at Bradford College and set out for my career in the music industry. Somewhere along that journey (and after coiling countless cables for a London studio hire company) I realised what I loved about music was the time I spent learning new things that I was interested in. 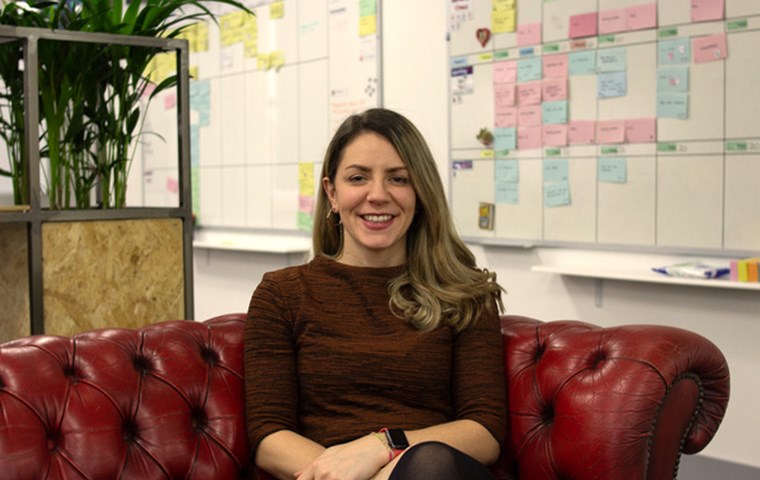 After completing college, I decided to take a year out before starting a degree. This lasted for a grand total of 3 months, until I registered to study for an Open University Business Studies degree part time instead. 19-year-old me did not anticipate just how much hard work this would be, and I ended up joining the police around the same time as the shifts complimented my study hours. I know that sounds a bit mad, but six years later, with a degree under my belt and a tonne of life experience at my disposal, I decided I was ready to find a career that I really wanted.

I moved into a community project role in the police and self-funded my way onto a PRINCE2 project management course, which was eye-wateringly expensive to me at the time but I hoped it would pay off and enable me to go for some of the job roles I’d previously seen advertised.

I know that sounds a bit mad, but six years later, with a degree under my belt and a tonne of life experience at my disposal, I decided I was ready to find a career that I really wanted.

Shortly after, I came across the HSCIC (now known as NHS Digital) which had a huge presence in Leeds. The company was recruiting due to a movement focused on bringing national NHS systems back in-house from suppliers, and I joined as a Project Officer at the tail end of the NHS Spine go-live. I was lucky to be there for the very start of the Secondary Uses Service in-housing and rewrite (SUS+). It was working on SUS+ where I started to learn about Agile, Scrum and DevOps, and I was fortunate to be surrounded by some amazing people who taught me everything I needed to know. I became an active speaker in the Agile community too and began to coach others in the organisation on different ways of working.

After a couple of years, I was keen to move on from the public sector and work in different industries. I had the really clever idea of quitting my job with nothing else lined up (queue many sleepless nights), but I knew I’d make it work somehow - let’s face it, I had to make it work! So I sorted my CV, met a recruitment agency, had a couple of successful interviews and I was offered a delivery lead role at Infinity Works, which is where I’m based today.

When I was in the police, I was selected for a mentoring scheme and ever since then I’ve always had a mentor in some guise or another - I don’t think I’d have achieved what I have without them.

Throughout all these changes, one of the constants has been surrounding myself with people who would both push and support me. When I was in the police, I was selected for a mentoring scheme and ever since then I’ve always had a mentor in some guise or another - I don’t think I’d have achieved what I have without them. I’ve been asked to mentor a few people myself through career changes which has been an absolute pleasure. There’s nothing better than when they ring you up to tell you they got the job!

I do wish I’d got into tech a bit younger, but that’s just my impatient side talking. I think the route I took has given me some incredible life experiences to use in the day-to-day, especially when working with people. I think if you want to take a more direct route, you need a clear idea of where you want to go, and back then I certainly didn’t have that clarity.

If I was to give my younger self any advice, I’d let them know that it’s okay to take some risks and that it’s really important not to continually play it safe.

I joined Infinity Works at a time when the company was still pretty small, so I’ve been able to carve out a role for myself that can grow with the business. I’m now the Cloud Commercial Lead across the company, meaning I’m responsible for business development and partnerships. I love getting to travel the country to meet new clients and working out ways in which we can help them. 2019 is a big year for my area of the business and things are off to a good start already.

If I was to give my younger self any advice, I’d let them know that it’s okay to take some risks and that it’s really important not to continually play it safe. If I’d known that then, maybe I would have had fewer sleepless nights when I quit my job! I’d also tell myself to always be curious, know what’s going on, meet new people and form new connections - it’s amazing what you can get done when you know the right people.

The best thing about the tech industry? The people for sure. I’ve met some of my best friends working in this industry, in fact we’ve all just been on a snowboarding holiday! The next best thing? The tech and having a geek out.

From the people I speak with day-to-day, there is no better time to get into a role in tech than right now. Many companies have some amazing graduate schemes and tech bootcamps are producing some great engineers that are going on to land roles with top tech firms. The only way the tech workforce is going to grow at the rate it needs to is by people making career changes, so if you do want a role in tech then make it happen!