Coming to our Ada

by she does digital • october 9

It's Ada Lovelace Day! Ada Lovelace’s contribution to technical science has had such a profound impact on computer advancement that we’re still benefiting from her creation of the very first computer code. In fact, you can thank Ada for being able to read this blog post right now.

Aside from her code and entrepreneurial insight into the future use of computers, Augusta Ada King-Noel, Countess of Lovelace, also left behind a powerful message to women - a message of inequality, injustice and deceit.

Ada was the only legitimate daughter of the famous English poet, Lord Byron. Worried that Ada would inherit her father’s erratic and flamboyant tendencies, her mother ensured that Ada was tutored in more practical subjects, specifically maths and sciences, subjects in which Lady Byron herself was well versed.

When she was just 17, Ada had a chance meeting with Charles Babbage at a party and was immediately entranced by his plans for the Analytical Engine - a complicated device which built on his earlier Difference Engine, with the inclusion of an elaborate punch card system. While the design was never realised, it contained all the essential elements of a modern computer. On the Analytical Engine, Ada commented:

Following a lecture given by Babbage on his plans for the Analytical Engine, the subsequent articles written in response by the Italian mathematician, Luigi Menabrea, were translated and added to by our very own poetic scientist, Ada Lovelace. In her notes, Ada describes an algorithm for the Analytical Engine to calculate Bernoulli numbers. This is considered to be the first published algorithm that was tailored specifically for computer implementation and is the very reason why Ada is cited as the very first computer programmer.

Ada also took the concept further, by suggesting that the use of the Analytical Engine could go beyond mathematical calculation:

“[The Analytical Engine] might act upon other things besides number, were objects found whose mutual fundamental relations could be expressed by those of the abstract science of operations, and which should be also susceptible of adaptations to the action of the operating notation and mechanism of the engine...Supposing, for instance, that the fundamental relations of pitched sounds in the science of harmony and of musical composition were susceptible of such expression and adaptations, the engine might compose elaborate and scientific pieces of music of any degree of complexity or extent.” 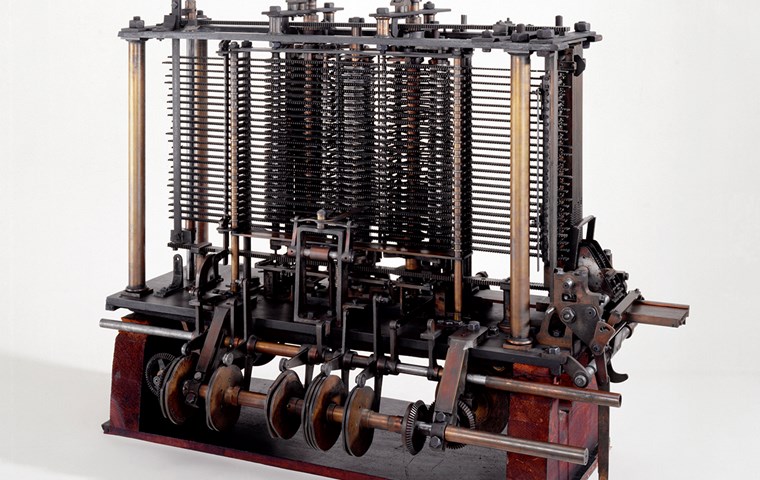 The downside to this incredible discovery is that Ada died of cancer in 1852, aged just 36 and having never gained recognition for the first theory that would underpin the digital world that now surrounds our lives. Unfortunately, this document and her work attracted no attention during her lifetime. It has, however, provided a valuable lesson on the importance of self-promotion, in a world where gender stereotypes have restricted the recognition of female contributors to the digital world.

Things we wouldn’t have without Ada

Creating the world’s first computer program in 1843 was pioneering and visionary work by Ada, which changed the shape of history, propelling us into the digital age with boundless imagination. Ada’s influence in our modern lives is seen everywhere, from your smartphone to self-serve checkouts, every computer program stems from her initial work on the Analytical Engine and while we have compiled a list of areas that Ada inspired, the indirect links to Ada are almost limitless.

2. The Turing Test
The Turing Test was developed to measure the human elements that a computer program displays. Ada’s belief that a machine could do everything but think, allowing humans and machines to work together in synchronicity was the inspiration Alan Turing needed to develop and build the Turing Test.

3. Women in STEM
Without the work of influential women such as Ada in fields like science, technology engineering and mathematics, we might not have as many strong female role models for young women today. The groundbreaking work of Ada has helped to break down gender stereotypes and barriers, encouraging women to pursue their passion in STEM.

It’s not only Ada who has fallen victim to historical gender stereotypes that have resulted in her achievements going unrecognised. Here we explore a selection of women who have helped to revolutionise our understanding of the world and didn't get the recognition they deserved at the time!

Lise Meitner’s work in nuclear physics paved the way for the discovery of nuclear fission - the fact that atomic nuclei can be split. This finding also led to the creation of the atomic bomb, but Meitner was snubbed when it came to the delivery of the Nobel Prize recognising her initial discovery on account of sexism, ethnicity and politics.

Meitner moved to Berlin following the completion of her doctoral degree in Physics at the University of Vienna. She began collaborating with Otto Hahn, a German Chemist who she’d continue to work with for more than thirty years. Hahn performed experiments with results that supported the idea that a nucleus could be split, but it was Meitner and her nephew Otto Frisch who created the theory behind the results.

The findings and fundamental theory of nuclear fission were published by Hahn, who neglected to include Meitner as a co-author. In addition, she was actively shut out by a researcher of the Nobel physics committee, meaning that Hahn alone was the only recipient of the 1955 Nobel Prize for chemistry. Meitner was not recognised for her contribution to the splitting of the atom. As her name wasn’t on the initial paper published by Hahn, she never did get the recognition she deserved.

The women of ENIAC

The ENIAC, considered to be the very first electronic computer, was a machine built during WW2. It had the sole purpose of carrying out calculations that plotted the trajectories of ballistics.

Although the ENIAC was built by men, it was the women mathematicians that programmed the ENIAC, creating algorithms that manipulated the machine into calculating trajectories, and therefore became the world’s very first coders.

Working on behalf of the US military during the 1940s, work undertaken by women of the ENIAC resulted in advancements such as the first ever piece of software, the development of computer memory and storage, and the beginnings of programming language. At the time the women pictured in front of the ENIAC were thought to be models that were posing for promotional imagery, but they were in fact, the very brains behind the successful targeting of enemy attacks. It’s 2018 and meeting the love of your life in a bar is quite unheard of these days. Instead, most singletons are meeting online via an app, but something we never stop swiping to think about is where it all began, and who started online dating?

Joan Ball was a working-class woman from the East End, and the very first person to invent an online dating system. She radically changed the dating landscape by providing the public with a platform that allows people to confidently approach a match, or as we know it today...‘slide into their DMs’.

Joan had a difficult early life - having an abusive relationship with her mother, she’d survived a suicide attempt at age 19, walked out of a mental hospital and worked through a string of unfulfilling jobs in retail. After working at a marriage bureau, she eventually started her own business at 27, where she focused on matching older singletons and divorcees.

Her marriage bureau, St James (later becoming Com-Pat), made its first computer matches in 1964. Although the press reluctantly advertised her computer matchmaking with unwelcomed scepticism, Joan thought it was a fun and intelligent way of meeting new people. Ball continued to advertise the business in local and national papers, getting published in The Observer, Evening Standard and Sunday Express to name a few.

Rival companies in the USA were using questionnaires to match people focusing on sex - something that Joan didn’t want to highlight. In 1970, Joan had managed to change the whole system which allowed her to match a pool of more than 50,000 members without any problems. Her questionnaire asked a series of questions and provided users with four matches. However, unlike today, participants wouldn’t be able to see who they’d matched with, but instead received the name and contact information of their matches, leaving the rest up to them.

By 1974, Joan had been diagnosed with Dyslexia and was in debt, so after a decade of running her own dating company, she sold it to her only competitor, Dateline. Happily, despite her troubled life and setbacks in her career, she later recognised herself as a pioneer of online dating.

Joan Ball changed the way that we discover and meet each other, through the creation of the first online dating platform, leaving behind a great legacy that lives on today. We should think of her, and her groundbreaking dating system the next time we score a match on Tinder!

So what does this mean for us today?

The gender bias and historical structural inequality of the computing industry have altered our understanding and views on technological advancement, and while much has changed in the last 2 decades, we still have a long way to go. Many women still find that their contributions to our understanding of the world are dismissed, downplayed, ignored or attributed to their male colleagues.

When we take a moment to realise that modern computers are the very embodiment of Ada’s ideas for the Analytical Engine, we can begin to understand the importance of her contribution, as well as learning from its subjugation.

Not only did Ada’s vision for engines far surpass what was physically possible at that time, but so did her thoughts. Ada smashed through the conventions of her time and didn’t ever let prejudice get in her way, but she fell down when it came to self-promotion. One thing we can learn from Ada Lovelace is that while it’s one thing to make waves in technological advancement, it’s quite another to get recognition for them.

Our hope at SDD, is that one day women will automatically receive the recognition they deserve. But until then, we’re here to highlight role models and help you build networks. We’d love to have your support in doing so! Share with us on social media, using #SheDoesDigital.